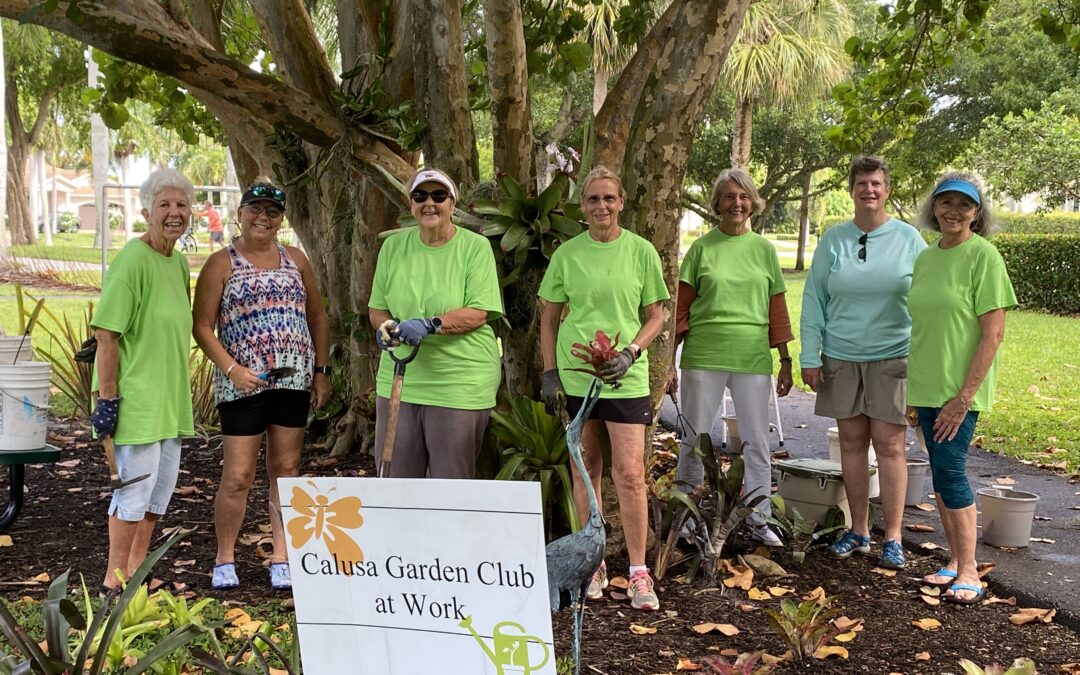 Next year, in 2023, Calusa Garden Club of Marco Island will celebrate the 40th anniversary of its founding.  The club was founded in 1982, and became affiliated with Florida Federation of Garden Clubs and National Garden Clubs, Inc. in 1983.  In preparation for the celebration of this 40th anniversary, Calusa Garden Club has begun installing a beautiful garden in Leigh Plummer Memorial Park, located on Barfield Drive.  The club worked with the City of Marco Island to locate a space for the garden, which will feature a variety of Florida friendly plants.  Chairpersons of the endeavor are Marianne Foley and Susan Oldershaw.

Marianne Foley and Sue Oldershaw presented the idea of the anniversary garden in the park, and the club members enthusiastically agreed to donate plants from their collections and to volunteer their time to make the garden a reality.  Foley and Oldershaw recruited members to work on fastening orchids and bromeliads to trees planting bromeliads under the trees.  The photos show a work group posing in their “Calusa Garden Club at Work” t-shirts before getting their hands dirty in the soil.  Another photo shows the park where the garden is being established before the work began.

In addition to collecting plants donated by garden club current members, Foley and Oldershaw contacted the family of the late Eva Schliesser, a founder of Calusa Garden Club, and asked permission to transfer some of Schliesser’s tree-mounted orchids to the new garden.  The results are spectacular!  Two extremely large orchids made the transfer and are mounted in the seagrape trees in the garden.  Foley and Oldershaw plan to populate the garden with as many plants from Calusa Garden Club founders’ gardens as possible.  The photo shows Foley and Oldershaw fastening a large orchid from Schliesser’s collection to one of the seagrape trees.

Charlette Roman and Linda Shockley, friends of Calusa Garden Club, have been Marco Island orchid growers for over 20 years.  They recently donated some of their collection of orchids to the garden, and Roman is pictured with Foley mounting orchids in the trees in the new garden.  In addition to orchids, the garden has a huge variety of bromeliads, some hanging from trees and some planted in the ground, many tillandsia, and a staghorn fern.   The Calusa Garden Club’s plan for the new garden is to plant it now during our Marco Island rainy season, and to nurture it and improve it this coming year in order for it to be ready for the club’s 40th anniversary celebration in the fall of 2023.