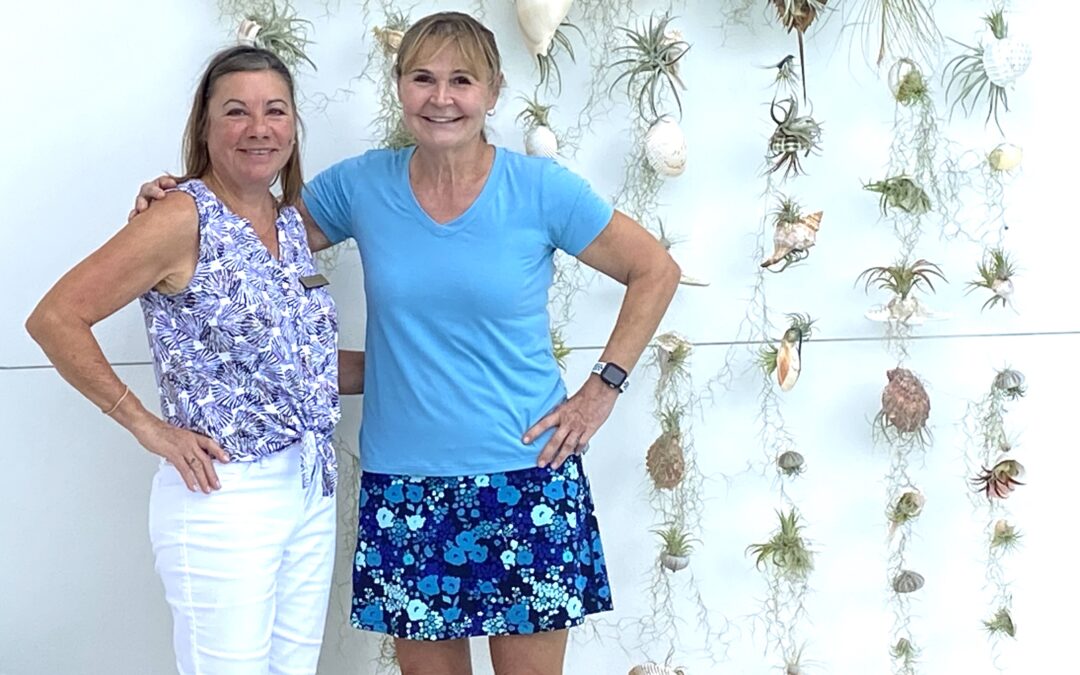 Tillandsia, or “air plants,” are epiphytes of the bromeliad family that grow while holding onto trees, bark, or even stones, without an extensive root system.  They come in over 650 different types, of varied colors, shapes and sizes.

About 20 garden club members enjoyed the educational presentation about tillandsia and peppered Schwoeppe and Kubinsky with questions. Tillandsia don’t absorb water and nutrients from their roots, but through their leaves, which may resemble spikes or flat ribbons.  Schwoeppe described the varieties of tillandsia, such as small spidery light grayish-green clumping types, dark green puffs with leaves that look like ribbons and resemble other bromeliads, and long Spanish moss that hangs from trees in Marco Island and throughout the southern United States.

Schwoeppe and Kubinsky also covered the watering needs of these plants, stating that although we call them “air plants,” tillandsia need water to survive. They described how they soak their own tillandsia in buckets or basins of water about once a week.  They soak them less often if temperatures outside are mild, and more often if temperatures outside are very hot or if they keep the plants inside where the air conditioning reduces the humidity level compared to Marco Island’s outside humidity level.  Then Kubinsky showed the group the “wall of tillandsia” she and her husband John Johnson had created on their lanai.  They hung fishing line between top and bottom metal rods to create a frame and then fastened shells containing tillandsia along the vertical axes. The result was a beautiful curtain of shells and plants.T

The workshop portion of the day followed the educational presentation.  Six garden club members had pre-ordered a tillandsia display kit , and Schwoeppe showed them how to glue tillandsia onto cut portions of cork tree bark with E6000 glue.  The members then added decorative shells to make a  lovely decorative display.  In addition, Schwoeppe gave the participants an offshoot from her pink quill tillandsia that they planted in small pots of orchid bark growing medium.  The beautiful pink quill tillandsia sends up a flat pink oval flower spike that looks woven, like a basket. The members were thrilled with their creations and showed each other their versions of the project.

Calusa Garden Club of Marco Island is a member of the Florida Federation of Garden Clubs.  Membership is open to persons interested in horticulture, floral design and environmental matters residing 5 months or more in Collier County.

The pictures were taken by Sara Wolf.

Linda Schwoeppe, left, and Eva Kubinsky, right in front of Eva Kubinsky’s wall of tillandsia on the Kubinsky-Johnson home lanai.